The Federal Sentencing Guidelines are rules that determine how much, or how little, prison time a federal judge may impose on a defendant who has been found guilty of committing a federal crime. First, though, attorneys and probation officials must determine where the defendant fits in on the Federal Sentencing Table (below). To do so, they must assign the defendant to a criminal history category (I-VI), and to an Offense Level (1-43). 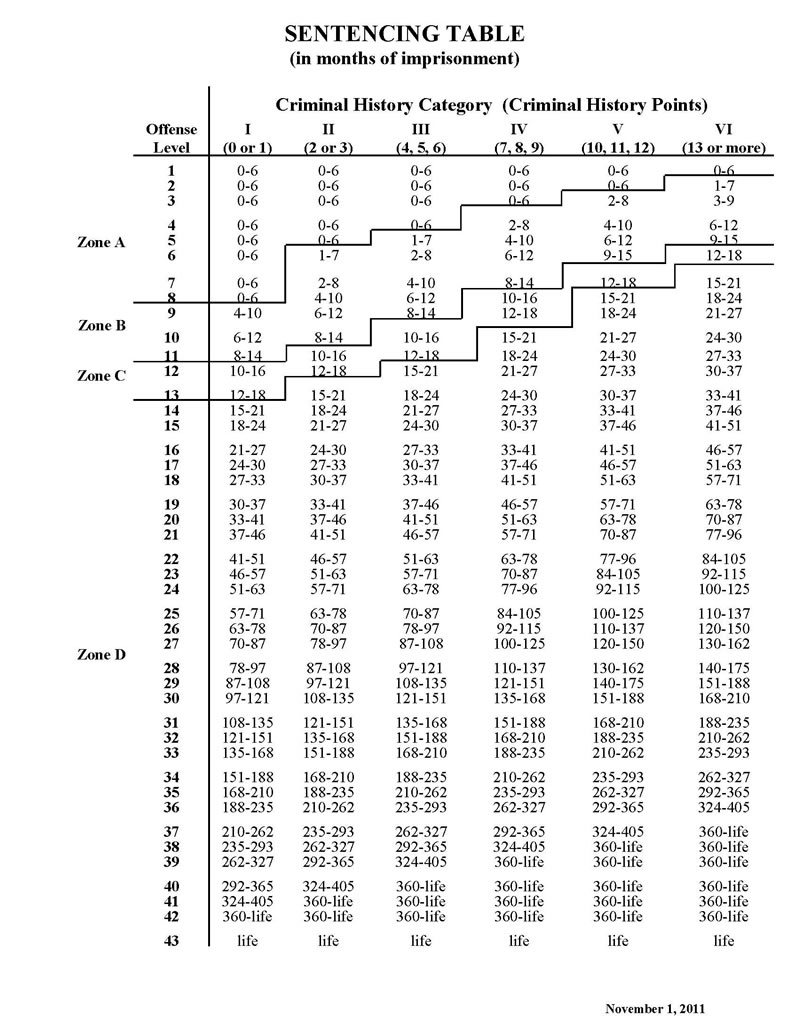 A defendant’s criminal history points are determined by:

For example, using the chart above, a defendant who has a final total of 13 criminal history points will be in category VI.

Next, officials must then decide the defendant’s offense level. To do so, they refer to Chapter 2 of the Federal Sentencing Guidelines, where they’ll find a a base number assignment for each crime. For example, First Degree Murder has a Base Offense Level of 43. Therefore, 43 is the starting point for determining the defendant’s final Offense Level.

Let’s say our defendant was convicted of Aggravated Assault, which has a Base Offense Level of 14. Officials must then determine what factors were in play during the commission of the crime, such as use of firearms, etc. For example, the use of a firearm during the assault would increase the offense level by 4 points, making it a level 18. If the assault was premeditated, add 2 points. If the firearm was discharged, well, that’s another 5 points. If the victim received serious injury during the attack…yep, that’s worth 7 points. A minor injury…3 points. Get the idea?

So, What’s the Damage?

Let’s add it up and see where our bad guy falls in the guideline.

Therefore, our guy, a repeat offender with a criminal history category VI, and an offense level of 25, will be in Zone D, subject to receive anywhere from 110 to 137 months in the federal penitentiary.

Easy enough, right? Well, it doesn’t stop there. Other factors are still waiting to be applied, such as downward or upward departures from the guidelines. For example:

Back to our crook who wound up with the offense level of 25. Well, let’s say he entered a guilty plea and accepted responsibility for his crime.

The guilty plea/acceptance-of-responsibility earned him a downward departure of up to 3 points. Take 3 points away from the original 25 and that leaves him with an offense level of 22. Back to the chart we go. His sentencing range at level 22 is a much lower 84-105 months…well over a year less. And that’s a nice little reward for owning up to the crime, which, by the way, saves the government a lot of money—no trial.

So, is this as clear as mud, or do you now sort of understand how sentences are handed out in federal court?

One thing’s certain, a 36/VI is going to prison for a long, long time.

Well, there’s that 3 point deduction, and that other 2-pointer … oh yeah, let’s not forget the four 1-point deductions. And our bad guy did help out by telling the government who sold him the machine guns.

I think our crook now has total of 6 points to the good. Hmm … with all those extra points, does that mean he can now commit one free crime?

The HOTTEST crime anthology of the year- AFTER MIDNIGHT: TALES FROM THE GRAVEYARD SHIFT!

The curtain rises on this collection of twisted tales, revealing the words of bestselling thriller author Lee Child. Child sets the stage for a series of mysterious and strange goings-on that occur between the hours of midnight and dawn … the graveyard shift.

This site is in the top 20 of all police blogs!

Lee Lofland is a proud member of International Thriller Writers